This leads to an exhalation of breath. As the air flows from the lungs it passes over the vocal folds and into the pharynx. This pressured air starts the vocal folds vibrating and blows open the glottis.

As a result vibrating molecules of air enter the mouth or nose – part of the of the pharynx and sound is created. The pharynx has three parts – the laryngo pharynx, the oropharynx and the nasal pharynx. These areas are our main resonating spaces.

Voice anatomist Merebeth Dayme calls the pharynx a ‘‘mobile muscular sleeve’’ because of its capacity to shorten lengthen and change shape with the movement of the articulating organs, as well as the up and down movement of the larynx itself. 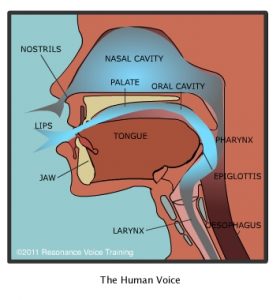 This diagram shows the airflow out of the nose and the mouth. The nasal sounds of the English language M, N and Ng are made when the tongue is pressed against the soft palate and stops the air flowing out of the mouth.

Try holding your nose and saying these sounds. However when you seal the soft palate against the back wall of the pharynx generally no air escapes down the nose and you can make the open vowel sounds A E I O U. In normal speech these activities are constant as we say words that contain both nasal and oral sounds.

Men’s vocal folds are approx 3mm longer than women’s regardless of their height or size. This allows many of them to have beefier bass baritone voices and more resonant timbre. Obviously tenors have higher, lighter voices but they still have a different quality of sound to women who can sing in this range.

The male voice also has a fantastic capacity for falsetto – a sound that is created by the vocal folds tilting and never coming together fully, but allowing for a space between them the whole time they resonate. This sound used by both Bach and the Bee Gees can be truly inspiring.
Male vocal issues tend to focus on monotony of tone, and insufficient breath (despite also breathing 24,400 times a day as women do). Feelings of flight and fight, adrenalin rush before speaking also afflict them.

Women have shorter vocal folds than men which is why their voices are not so deep in tone and do not go as low. The way the cartilages of the male pharynx grow together accounts for the protuberence of the male Adam’s apple which is not as pronounced in women although they also have a shield-shaped thyroid cartilage. We breath approximately 24,400 times a day – give or take. Thankfully we don’t have to remember to do it. The diaphragm works reflexively but breathing can also be a voluntary act – in other words most of the time we are on automatic pilot but if we want to take over the controls we can.

Women’s vocal issues tend to centre around breathy sound, lack of volume, sounding ‘girly’ and nerves. Our belief is that good voice training releases your voice and you with it. It can allow your personality out of its box. Without being a therapy as such, it can help to dis-inhibit you and help you get rid of outgrown social constraints, increasing your self-confidence as a result and allowing for personal growth.

Resonance was established by its Director, Louise Kerr in 2001, after completing the globally renowned Voice MA at Central School of Speech and Drama.

We are one of the longest established voice training companies in the UK providing tailored training courses for business.